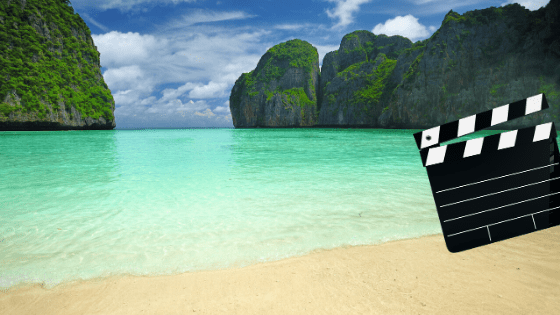 It may be one of the industries most affected by Covid-19, but those of us with a love of travel know that that wanderlust feeling doesn’t disappear just because we can’t go on an adventure. As part of our virtual travel series, we want to encourage people during lockdown to get transported to the world of travel through their screens. Get inspired for your next trip with some of our favourite travel films we’ve watched.

This biographical movie stars Reese Witherspoon, who plays a woman who trekked over a thousand miles on a solo hike along the Pacific Crest Trail without having had any trekking experience. This true story is based on Cheryl Strayed, who took the trek as an attempt to heal from some personal tragedies she suffered.

Why we love it: The inspirational message behind this movie is that, with will and determination, most things are possible. It also captures the spirit that travel can be a healer.

How to do it: Check out the Pacific Crest Trail Association, which offers advice on trekking and camping gear, food, maps, and permits.

Based on Deborath Moggach’s novel of the same name, several British retirees decide to stay at what is advertised as an exotic retirement home in Jaipur, India. Having arrived at the Best Exotic Marigold Hotel after their eventful journeys, they realize it’s far from exotic and is actually a run-down dilapidated site. It’s how they deal with their past and embrace the future, that makes this film so heartwarming.

Why we love it: Each character’s personal journey shows that you’re never too old to turn your life around and do something completely different. And the important message that each of us has to make the best of life when things doesn’t turn out as expected.

How to do it: The hotel used in this travel film is called the Ravla Khempur, which is located in a small village in the Rajasthani countryside. Unlike the Best Exotic Marigold Hotel, the real hotel is more charming and situated in a much quieter location. Wild Frontiers Travel offer a small group 11-day tour.

Based on Yann Martel’s novel of the same name, Life of Pi tells the story of a zookeeper’s teenage son who finds himself stranded at sea on a lifeboat with a Bengal tiger. His deeply religious principles conflict with his fight for survival as both he and the tiger learn to trust each other over the months they are confined at sea.

Why we love it: It’s such a simple plot yet gripping at the same time with powerful underlying messages about life. Depending on how you perceive it, the story can be either believable or unbelievable, so you don’t truly know what the truth is at the end.

How to do it: It’s probably best not to get stranded at sea on a lifeboat! Some of the movie was filmed in Taipei Zoo in Taiwan but you can see Bengal tigers in the wild in many national parks in India and Nepal. Organized trips and safaris are a sure way of safely seeing these majestic creatures in their habitats.

Based on Alex Garland’s book of the same name, The Beach follows the character of Richard, a young traveller who goes to the other side of the world to find his paradise, a remote secret settlement in Thailand. But Eden is not all it’s cracked up to be and neither are the people, some who will kill to keep its secret.

Why we love it: This is the travel film that inspired me to go backpacking around Thailand in the summer term of my university years. The lure of a bustling Bangkok and paradise beaches, I knew it would be the most amazing travel experience and it was. Plus, it comes with a killer soundtrack.

How to do it: You can travel to the beach where the film is located on Phi Phi Leh Island, but due to the rise in tourism in the area, unfortunately it’s not remote anymore. However, there are many wonderful golden sandy beaches on the islands surrounding Phuket.

The Last King of Scotland

A Scottish doctor travels to Uganda on a medical mission and becomes President Idi Amin’s personal physician. As the pair become closer, he sees the powerful and brutal dictator for what he truly is and fights for his life as he struggles to escape from Uganda and its corrupt leader.

Why we love it: Whilst blindly stopping a spinning globe with your finger may not be the best way to decide on your next trip, I did it once after watching this movie and ended up doing a two-week camping adventure on the West Coast of the USA.

How to do it: Uganda is regarded as one of Africa’s safer countries to travel and the sheer number of national parks make it ideal for wildlife watching, especially if you want to see the country’s star attraction, the endangered mountain gorilla.

Set in the early 90s, this movie follows two best friends who set out on a weekend road trip to get away from their unhappy relationships back home. However, they end up going on the run after committing a crime. It’s a classic movie that was regarded as controversial at the time due to its feminist take on male violence.

Why we love it: Going on a road trip with your mate sounds like enormous fun.

How to do it: Grab your bestie, book a convertible and hit the road. The actual route in this travel film doesn’t exist but most of it was shot in California and Utah. Highway 99 is great for road trips as it’s scenic and offers plenty of options to stop and explore different places.

Having had enough of the flawed men in their lives, two women decide to swap their homes across the other side of the Atlantic. Set in Hollywood and England, each character gets an unexpected surprise when they arrive at their holiday homes, which are the polar opposite of their own homes. As it’s a romance-comedy, you can probably guess how the plot unfolds.

Why we love it: It’s an easy, feel-good Xmas movie that you can’t help but love (if you’re a bit gushy like me)! Not for those that don’t like the formulaic Hollywood happy ending.

How to do it: Although the English cottage in the movie doesn’t exist, it was inspired by Honeysuckle Cottage in Surrey. You can find many quaint period cottages just like it all over the country. The grand Hollywood house is located in San Marino in California.

Two American women travel to Barcelona together for a summer holiday and fall for the same guy, a seductive painter who invites them over for a weekend of food, art and sex. But his fiery and psychotic ex-wife unexpectedly arrives and is about to shake things up for them all.

Why we love it: The movie is set in my favourite city, Barcelona and does a great job showing off the buzz and energy of the Spanish city. In typical Woody Allen style, it has sex, comedy and great drama.

How to do it: Barcelona offers everything from amazing bars, restaurants, historic sites, and some of the best shopping in Spain. You can do a guided film tour to see the beauty of Barcelona through the eyes of the director.

This is a poignant and moving story about a man and woman who form an unlikely friendship after meeting in a Tokyo bar. Through their evolving relationship, they realize just how lonely they had become and that they want more than what they have back at home.

Why we love it: It differs from the typical formulaic Hollywood plot. It’s the sophisticated and subtle acting that makes this film, so don’t expect big drama.

How to do it: Whilst most of movie’s scenes were shot in the Hyatt Park Hotel, it’s the dazzling lights of Shinjuku and Shibuya that will give you an authentic flavour of Tokyo’s bustling scene.

Victor is an Eastern European tourist who arrives at New York’s JFK Airport but finds that unexpected events make it impossible for him to leave. With only a suitcase and peanut can in hand, he sets up home in the airport for nine months, where he meets an attractive flight attendant.

Why we love it: This travel film inspired by a true story of an Iranian refugee who lived in a departure lounge at Charles DeGaulle Airport in Paris for 8 years. The film strikes a good balance between sentimentality and humour and offers a fascinating insight into what life could be like as a stateless individual with nowhere to go.

How to do it: The airport in the movie was actually a purpose-built hangar and you can’t legally live inside an airport. Interestingly, there is a list of people who have done so though. If I were to be stuck inside an airport for a long time, I would definitely choose Singapore Changi Airport, which is both vast and luxurious. Take your credit card though as the world-class shopping and dining would keep you busy before relaxing at one of the many plush lounge areas!

We haven’t seen these yet, but they are on our to-watch list:

When you do travel again, we can help you travel in eco style with our Eco Deluxe Travel Kit.

If you enjoyed reading this, you might also like to read about Virtual Museum Tours and Virtual Festivals.

The Jolly Turtle supplies eco-friendly bespoke and pre-packed kits for events, travel, hospitality, and lifestyle, offering a simple and convenient way to shop for all your plastic-free essentials.